Alva Nunez Cabeza de Vaca carried a name bestowed upon his maternal grand‑ father who fought the Moors in Spain and who used a cow’s skull to mark a strategic pass through a mountain. Cabeza de Vaca fought in Italy and Spain before leaving with Panfilo de Narvaez (1478–1528) on his 1527 expedition to Florida. Narvaez proved an unwise captain, losing men and all of his six ships to desertion, hurricane, and a failed attempt to discover a port along the Florida shore. 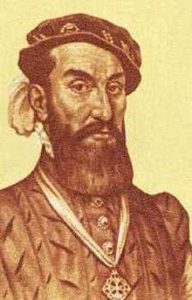 Stranded in Florida along with a fraction of Narvaez’s remaining sailors, Cabeza de Vaca was left to fend for himself against threatening Native Americans and an inhospitable land. The men journeyed to what is now Texas. Of the 600 men who undertook the expedition, only four ultimately survived, one of whom was Cabeza de Vaca. For ten years, Cabeza de Vaca faced extraordinary hardships as he traveled along the Texas coast, including being taken as a prisoner by Native Americans (the Karankawa) for over two years. Among the Native Americans, he gained a reputation as a trader and then as a healer, a power he himself attributed to his Christian faith. He ultimately gathered a following of Pimas and Opatas who traveled with him to what is now New Mexico and northern Mexico.

There, he once again encountered fellow Europeans who took Cabeza de Vaca prisoner and enslaved the Native Americans with him. In 1537, Cabeza de Vaca returned to Spain where he vocally protested the predatory behavior of slave hunters like his captor Diego de Alcaraz (c. 1490–1540). He returned again to South America as leader of an expedition but saw his own colony devolve into predatory behaviors. In Rio de Plata, Cabeza de Vaca was removed as leader; he ultimately returned to Spain where he lived the remainder of his life.

The Relation of Alvar Nunez Cabeza de Vaca was begun in 1540 while he was still in Spain. In it, he describes the dangers and suffering he endured from the Narvaez expedition, the Europeans’ unjust treatment of Native Americans, and the opportunities for further exploration and colonization in the New World.

Figure 2. Map of the Expedition of Cabeza de Vaca