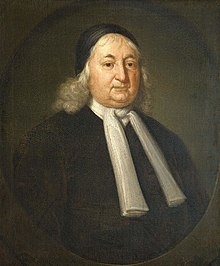 Samuel Sewall was born at Bishop Stoke, Hampshire, England, though his grandparents were early immigrants to Massachusetts, he was born in Bishop Stoke when his parents were visiting England. He moved to Newbury, Massachusetts in 1661 and graduated Harvard in 1671. He studied for ministry but after a short period of service quit to become a business man. By the time he was forty he was a prominent figure in the political life of the colony, and as a judge of the probate court he took a leading part in the witchcraft trials at Salem. He later became convinced he was mistaken in this prosecution and he made a public confession of his error.  His Diary covers a period of fifty six years (1673-1729) and provides an intimate personal record as well as a detailed picture of colonial life. He asked to be pardoned for his role in the witchcraft trials in 1697. He wrote The Selling of Joseph the first recorded anti-slavery tract in America in 1700. Sewell argued, “Liberty is in real value next unto Life: None ought to part with it themselves, or deprive others of it, but upon the most mature Consideration.” He regarded “man-stealing as an atrocious crime which would introduce among the English settlers people who would remain forever restive and alien”.

Author Introduction-Samuel Sewall (1652-1730) by Helena Marvin is licensed under a Creative Commons Attribution-ShareAlike 4.0 International License, except where otherwise noted.