To John Adams from Thomas Jefferson (source)
January 21, 1812
Dear Sir,
—I thank you before hand (for they are not yet arrived) for the specimens of homespun[1] you have been so kind as to forward me by post. I doubt not their excellence, knowing how far you are advanced in these things in your quarter. Here we do little in the fine way, but in coarse and middling goods a great deal.
[…] A letter from you calls up recollections very dear to my mind. It carries me back to the times when, beset with difficulties and dangers, we were fellow laborers in the same cause, struggling for what is most valuable to man, his right of self-government. Laboring always at the same oar, with some wave ever ahead, threatening to overwhelm us, and yet passing harmless under our bark, we knew not how we rode through the storm with heart and hand, and made a happy port.
[…]  But whither is senile garrulity leading me? Into politics, of which I have taken final leave. I think little of them and say less. I have given up newspapers in exchange for Tacitus and Thucydides, for Newton and Euclid, and I find myself much the happier. Sometimes, indeed, I look back to former occurrences, in remembrance of our old friends and fellow laborers, who have fallen before us. Of the signers of the Declaration of Independence, I see now living not more than half a dozen on your side of the Potomac, and on this side, myself alone. You and I have been wonderfully spared, and myself with remarkable health, and a considerable activity of body and mind. I am on horseback three or four hours of every day; visit three or four times a year a possession I have ninety miles distant, performing the winter journey on horseback. I walk little, however, a single mile being too much for me, and I live in the midst of my grandchildren, one of whom has lately promoted me to be a great grandfather.

To Thomas Jefferson from John Adams (source)(original)
February 3, 1812
[…] your Memoranda of the past, your Sense of the present and Prospect for the Future Seem to be well founded, as far as I See. But the Latter, i.e the Prospect of the Future, will depend on the Union: and how is that Union to be preserved. Concordiâ Res parvae crescunt, Discordiâ Maximæ dilabuntur[2]. Our Union is an immense Structure.
[…] The Union is Still to me an Object of as much Anxiety as ever Independence was. To this I have Sacrificed my Popularity in New England and yet what Treatment do I Still re
ceive from the Randolphs and Sheffeys of Virginia. By the way are not these Eastern Shore Men? My Senectutal Loquacity has more than retaliated your “Senile Garrulity.”
[…] I walk every fair day. Sometimes 3 or 4 miles. Ride now and then but very rarely more than ten or fifteen Miles.
[…] I have the Start of you in Age by at least ten Years: but you are advanced to the Rank of a Great Grandfather before me. Of 13 Grand Children I have two William and John Smith, and three Girls, Caroline Smith Susanna and Ab’igail Adams, who might have made me Great Grand Children enough. But they are not likely to employ their Talents very Soon. They are all good Boys and Girls however, and are the Solace of my Age. I cordially reciprocate your Professions of Esteem and Respect.

Madam joins and Sends her kind Regards to your Daughter and your Grand Children as well as to yourself.

To John Adams from Thomas Jefferson (source)(origin)
October 12-13, 1813
[…] In extracting the pure principles which he[3] taught, we should have to strip off the artificial vestments in which they have been muffled by priests, who have travestied them into various forms, as instruments of riches and power to themselves.
[…]  We must reduce our volume to the simple evangelists, select, even from them, the very words only of Jesus, paring off the amphiboligisms[4] into which they have been led, by forgetting often, or not understanding, what had fallen from him, by giving their own mis- conceptions as his dicta, and expressing unintelligibly for others what they had not understood themselves. There will be found remaining the most sublime and benevolent code of morals which has ever been offered to man. I have performed this operation for my own use, by cutting verse by verse out of the printed book, and arranging the matter which is evidently his, and which is as easily distinguishable as diamonds in a dunghill. The result is an octavo of forty-six pages, of pure and unsophisticated doctrines, such as were professed and acted on by the unlettered Apostles, the Apostolic Fathers, and the Christians of the first century.

[5]I have thus stated my opinion on a point on which we differ, not with a view to controversy, for we are both too old to change opinions which are the result of a long life of inquiry and reflection; but on the suggestions of a former letter of yours, that we ought not to die before we have explained ourselves to each other.

The question before the human race is, Whether the God of nature shall govern the World by his own laws, or Whether Priests and Kings shall rule it by fictious Miracles? Or, in other Words, whether Authority is originally in the People? or whether it has descended for 1800 years in a succession of Popes and Bishops, or brought down from Heaven by the holy Ghost in the form of a Dove, in a Phyal of holy Oil?

I verily believe I was as wise and good, seventy years ago, as I am now. At that Period [6] Lemuel Bryant was my Parish Priest; and Joseph
Cleverly my Latin School Master. Lemuel was a jolly jocular and liberal scholar and divine. Joseph a scholar and gentleman; but a biggoted Episcopalian of the school of Bishop Saunders and Dr. Hicks, -a down right conscientious passive obedience man, in Church and State. The parson and the pedagogue lived much together, but were eternally disputing about government and religion. One day, when the schoolmaster had been more than commonly fanatical, and declared “if he were a monarch, he would have but one religion in his dominions;” the parson coolly replied “Cleverly! you would be the best man in the world, if you had no religion.”
Twenty times, in the course of my late reading, have I been upon the point of breaking out, “This would be the best of all possible worlds, if there were no Religion in it!!!”  But in this exclamation I should have been as fanatical as Bryant or Cleverly. Without religion this world would be something not fit to be mentioned in polite society, I mean hell. So far from believing in the total and universal depravity of human nature, I believe there is no individual totally depraved. The most abandoned scoundrel that ever existed, never yet wholly
extinguished his conscience, and while conscience remains there is some Religion.
[…] How it is possible that mankind should submit to be governed, as they have been, is to me an inscrutable mystery. How they could bear to be taxed to build the Temple of Diana at Ephesus, the pyramids of Egypt, Saint Peter’s at Rome, Notre Dame at Paris, St. Pauls in London, with a million et ceteras; when my navy yards, and my quasi Army made such a popular clamour, I know not. Yet all my peccadillos never excited such a rage as the late compensation law!

If, by religion, we are to understand sectarian dogmas, in which no two of them agree, then your exclamation on that hypothesis is just, “that this would be the best of all possible worlds, if there were no religion in it.” But if the moral precepts, innate in man, and made a part of his physical constitution, as necessary for a social being, if the sublime
doctrines of philanthropism, and deism taught us by Jesus of Nazareth in which all agree, constitute true religion, then, without it, this would be, as you again say, “something not fit to be named, even indeed a Hell.”

I believe in God and in his Wisdom and Benevolence: and I cannot conceive that such a Being could make Such a Species as the human merely to live and die on this Earth. If I did not believe a future State I should believe in no God. This Unverse; this all; this το παυ[7]; would appear with all its Swelling Pomp, a boyish Fire Work.

We think ourselves possessed or at least we boast that we are so of Liberty of conscience on all subjects and of the right of free inquiry and private judgment, in all cases and yet how far are we from these exalted privileges in fact. There exists I believe throughout the whole Christian world a law which makes it blasphemy to deny or to doubt the divine inspiration of all the books of the old and new Testaments from Genesis to Revelations. In most countries of Europe it is punished by fire at the stake, or the rack or the wheel: in England itself it is punished by boring through the tongue with a red hot poker: in America it is not much better, even in our Massachusetts which I believe upon the whole is as temperate and moderate in religious zeal as most of the States. A law was made in the latter end of the last century repealing the cruel punishments of the former laws but substituting fine and imprisonment
upon all those blasphemers upon any book of the old Testament or new. Now what free inquiry when a writer must surely encounter the risk of fine or imprisonment for adducing any argument for investigation into the divine authority of those books? Who would run the risk of translating Volney’s Recherches Nouvelles? who would run the risk of who would run the risk of translating Dupuis?[8] but I cannot enlarge upon this subject, though I have it much at heart. I think such laws a great embarassment, great obstructions to the improvement of the human mind. Books that cannot bear examination certainly ought not to be established as divine inspiration by penal laws.
[…] The substance and essence of Christianity as I understand it is eternal and unchangeable and will bear examination forever but it has been mixed with extraneous ingredients, which I think will not bear examination and they ought to be separated.

I sincerely congratulate you on the high gratification which the issue of the late election must have afforded you. [9]
[…]So deeply are the principles of order, and of obedience to law impressed on the minds of our citizens generally that I am persuaded there will be as immediate an acquiescence in the will of the majority as if Mr. Adams had been the choice of every man.
[…]Nights of rest to you and days of tranquility are the wishes I tender you with my affectᵗᵉ respects 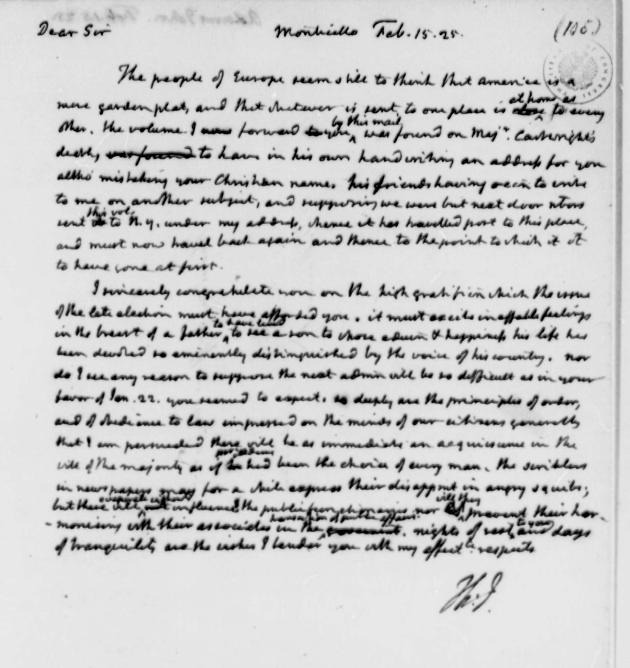 American Literatures Prior to 1865 by Thomas Jefferson and John Adams is licensed under a Creative Commons Attribution-ShareAlike 4.0 International License, except where otherwise noted.