Thomas Morton (c. 1579–1647) was an early colonist in North America from Devon, England. A lawyer, writer, and social reformer known for studying Native American culture, he founded the colony of Merrymount, located in what is now Quincy, Massachusetts.

He was born in Devon in 1579, into a conservative Anglican family belonging to the landed gentry. He became a lawyer and worked for Ferdinando Gorges, the governor of Plymouth with many interests in New England, and after failed marriage plans in 1618 (due to the influence of a Puritan stepson) Morton decided to move to the colonies. In 1624 he traveled with Captain Wollaston and settled among the native Algonquian tribes whose culture Morton found more “civilized and humanitarian” than the Puritans. Morton discovered that Wollaston was selling indentured servants into slavery on Virginia tobacco plantations and Morton encouraged the remaining servants to rebel against Wollaston and create a free community. Wollaston fled to Virginia in 1626 and left Morton in sole command of the colony which was renamed Mount Ma-re or Merrymount. Morton preferred to be called a “host” of the colony and a utopian like project was begun and the colonists were declared free men and there was an attempt to integrate into local Algonquian culture. Morton’s long term plan to
“further civilize” the native population by converting them to his liberal form of Christianity and provide them free salt to enable food preservation and let the Algonquian to settle permanently. Morton’s religious beliefs were criticized by the Puritans as heathenism and scandalous rumors spread of debauchery at Merrymount. 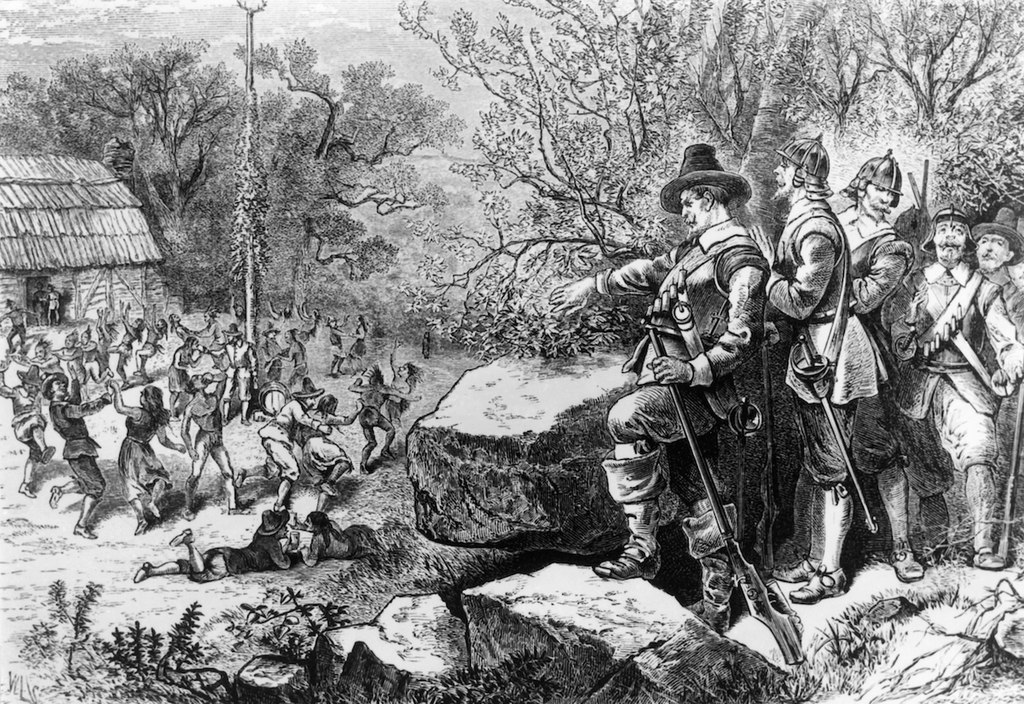 Morton had taken traditional West Country May Day customs to the colony, and combined them with fashionable classical myth, couched to his own libertine tastes and fueled by the enthusiasm of his newly freed fellow colonists. On a practical level the annual May Day festival was not only a reward for his hardworking colonists, but a joint celebration with Native tribes who also marked the day, and a chance for mostly male colonists to find brides among the natives.

Puritan ire was no doubt also fueled by the fact that Merrymount was the fastest-growing colony in New England, rapidly becoming the most prosperous, as an agricultural producer and in the fur trade, where Plymouth Colony was trying to build a monopoly. The Puritan account of this regarded the colony as a decadent nest of good-for-nothings.

The second 1628 Mayday, “Revels of New Canaan”, inspired by “Cupid’s mother” – with its “pagan odes” to Neptune and Triton (as well as Venus and her lustful children, Cupid, Hymen and Priapus), its drinking song, and its erection of a huge 80-foot (24 m) Maypole, topped with deer antlers – proved too much for Morton’s Puritan neighbors. The Plymouth militia took the town the following June, chopped down the Maypole and arrested Morton. He was put in stocks in Plymouth, given a trial and marooned on the deserted Isles of Shoals off the coast of New Hampshire, until an English ship could take him home. He was left to starve but was supplied with food by friendly natives from the mainland who were said to be bemused by the events.

Barely surviving his harsh treatment during his journey into exile, he regained his strength in 1631, and after a short spell in an Essex jail, was released and began to sue the Massachusetts Bay Company, the political power behind the Puritans. To the surprise of Protestant supporters of “Plymouther Separatists”, Morton won strong backing for his cause and was treated as a champion of liberty. 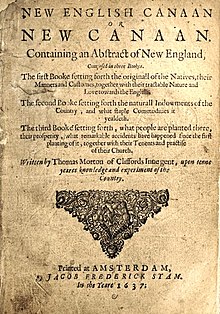 In 1637 Morton became a political celebrity with the publication of his three-volume New English Canaan. Morton produced in these three books an inspired denunciation of Puritan government in the colonies and their policy of land enclosure against the native population. The first edition of New English Canaan was destroyed by the English government in 1637 with a small number of copies surviving in the Netherland.

After an ill-conceived triumphal return to the Plymouth Colony, he was arrested and accused of being a Royalist “agitator”, and put on trial for his role in revoking the colony’s charter, and on charges of sedition. By September he was imprisoned in Boston. His trial was delayed through winter “so evidence could be sought,” but none arrived. As his health began to fail, his petition for clemency was granted. Isolated from his supporters by the English Civil War, he ended his days amid the West Country planters of Maine, protected there by Gorges’ supporters. He died in 1647 at the age of 71.

English:  A 19th-Century Engraving of Cpt. Miles Standish and His Men Observing the “immoral” Behavior of the Maypole Festivities of 1628 at Merrymount. 1850. Wikimedia, Public Domain.

American Literatures Prior to 1865 by Helena Marvin is licensed under a Creative Commons Attribution-ShareAlike 4.0 International License, except where otherwise noted.