Literature of the New Nation – Poe

Born in Boston to actors Elizabeth Arnold Poe and David Poe, Jr., Edgar Allan Poe was swiftly abandoned by both parents before the age of four. His father simply picked up and left the family. A year later, Poe’s mother unfortunately contracted tuberculosis and passed away, leaving Poe an orphan. He was taken in by John Allan, a tobacco merchant, and his wife, Frances Valentine Allan. The Allans raised Poe as their own, though he was never officially adopted by the couple. 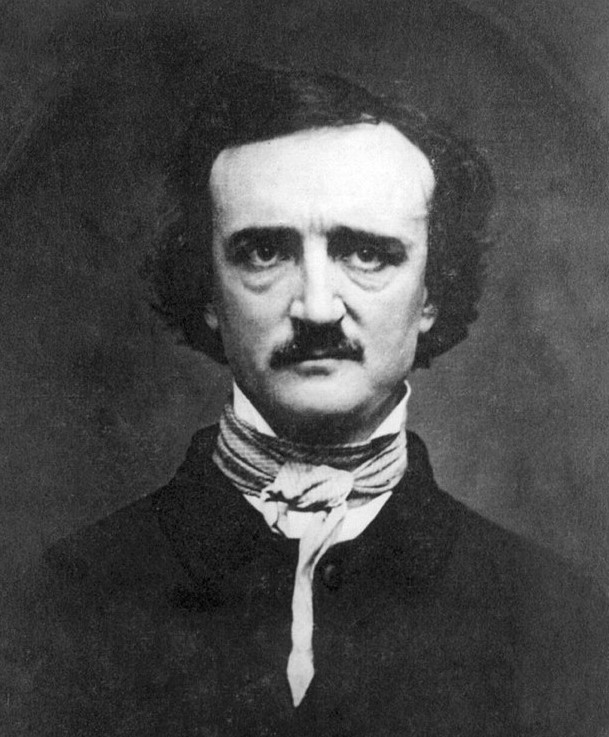 Poe took to poetry at a young age, which often caused a clash between himself and his adoptive father. Whereas John Allan wished for Poe to take over the family business, Poe had no such desire and continued to write. As a young man, he attended the University of Virginia with Allan footing the  bill.  However, this arrangement didn’t last long as Allan refused to continue to pay for Poe’s secondary education, reportedly due to financial disagreements between the two men. After amounting a mass of debt due to gambling, Poe was forced to leave the university and enlisted in the Army.

It was while in the Army that Poe anonymously published his first collection, Tamerlane and Other Poems (1827). After Frances Valentine Allan, the only mother Poe knew, died of tuberculosis, John Allan and Poe mended their relationship, and Allan helped Poe get accepted into West Point. Though he was a good student, Poe’s mind wandered more to prose and poetry and less to his duties at West Point. Worse yet, his relationship with Allan was on the rocks yet again. Poe was kicked out of West Point, though it is unclear if Poe purposefully caused his expulsion to spite his foster father. Allan won the parting shot though; after his death in 1834, he left Poe out of his will completely.

After West Point, Poe traveled extensively, living in poverty as a full-time writer in major cities like New York City, Baltimore, Philadelphia, and Richmond. While in Richmond, he fell in love with his cousin, Virginia Clemm, and married her in 1836. Poe was 27, and Clemm was 13.

After winning a short story contest, Poe’s writing career picked up and he went on to publish more short stories in literary journals and magazines. He also worked as a critic for the Southern Literary Messenger and was notorious for his biting reviews, earning him the nickname “Tomahawk Man.” His position as critic with the magazine proved short-lived as his seething reviews often led to confrontation. It is believed he was fired after his boss found him drunk on the job. Over the years, Poe had developed a liking to alcohol, eventually leading to a dependence on liquor. This dependence evolved into full-blown alcoholism when Virginia fell ill with tuberculosis in 1842. The very disease that killed his birth mother and later his adoptive mother seemed insatiable, targeting the women Poe loved. It was while his wife was sick that Poe wrote the famous poem for which he is known: “The Raven” (1845).

“The Raven” skyrocketed Poe from infamous critic to famous poet. But the literary recognition of his arguably most popular poem did not come with the paycheck one would expect. He only received $9 from The American Review for it, and Poe continued to struggle financially for the rest of his life.

Debt and alcoholism weren’t the only demons haunting Poe. Death soon darkened his door yet again. In 1947, Virginia lost her battle with tuberculosis, devastating Poe. She was only 24 years old. After her death, Poe’s dependency   on substances grew until, in 1849, he died at the age of 40 under suspicious circumstances. Some sources say he drank himself to death while others blame his death on drugs or rabies. No one is certain how Poe died, and it remains a mystery to this day, not unlike the gothic endings of some of his most celebrated works.

Poe may have beaten Death in the end; his works are still recognized as an important part of the American Literature canon. Modern day readers have Poe to thank for detective fiction, a genre which some credit him for creating. Best known for his evocative storytelling and his gothic style, Poe continues to influence writers across the centuries from Sir Arthur Conan Doyle to Stephen King, who   is quoted in a Mystery Scene magazine article as saying of Poe, “He wasn’t just a mystery/suspense writer. He was the first.”