GRIMKÉ, SARAH MOORE was born in Charleston, South Carolina. Her father, John Fachereau Grimké, served as an artillery officer in the Continental army and a jurist of some distinction. He was a man of wealth and culture and a slave-holder. Sarah’s father cut her educational short because she was a girl, yet her brothers shared their studies with her and later with her sister as well. In fact, Sarah was heavily influenced by her older brother, Thomas Smith Grimke, who was educated at Yale, became a successful lawyer, and served in the South Carolina state Senate from 1826-1830. Thomas strongly advocated spelling-reform, temperance, and the Transcendentalist idea of absolute non-resistance. 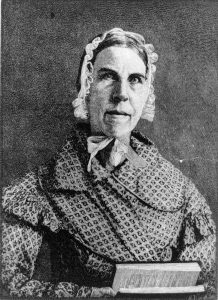 Having been already dissatisfied with the Episcopal and the Presbyterian Church, converted to the Quaker faith during a 1821 visit to Philadelphia. Sometime after that, Sarah grew into a belief in abolition, partly through her sister’s influence, and by the end of 1836 wrote an Epistle to the Clergy of the Southern States. This began her public work for the abolitionist movement, as she began giving public addresses regarding slavery. Despite being in the north, Grimké’s position was not viewed kindly by everyone. Several members of the General Association of Congregational Ministers of Massachusetts called on the clery to close their churches to women exhorters. Both Garrison and Whittier defended the Grimke sisters publicly.

Sarah, who had never forgotten that her studies had been curtailed because she was a girl, contributed to the Boston Spectator papers on “The Province of Woman” and published Letters on the Condition of Women and the Equality of the Sexes (1838) — the real beginning of the “woman’s rights” movement in America, and at the time a cause of anxiety to Whittier and others, who urged upon the sisters the prior importance of the anti-slavery cause.

Sarah never married and lived her adult life with her sister, Angelina (who did marry in Theodore Weld in 1838). From 1854-1864 the three ran a school for black and white alike at Eagleswood, near Perth Amboy, New Jersey. Later, they moved to Hyde Park, Massachusetts, and continued teaching. At age 75, Sarah translated and abridged Lamartine’s life of Joan of Arc. Sarah died in Hyde Park, Massachusetts on December 23, 1873.

Grimké has been remembered well in contemporary culture. Sarah was inducted into the National Women’s Hall of Fame in 1998 and The 2014 Sue Monk Kidd book An Invention of Wings is based on her life.