Born in London, Roger Williams hailed from a merchant family. His work as a stenographer for Sir Edward Coke (1552–1634) led to Williams’ attending a grammar school in London and then enrolling as a scholarship student at Cambridge University in 1623. He earned his BA with honors and, in order to graduate, signed an oath to the Anglican Church, which was headed by the English monarch. He began a course of study for an MA in theology; however, growing estranged from what he saw as the corrupt practices of the Anglican Church, he withdrew without obtaining the degree and converted to Puritanism. 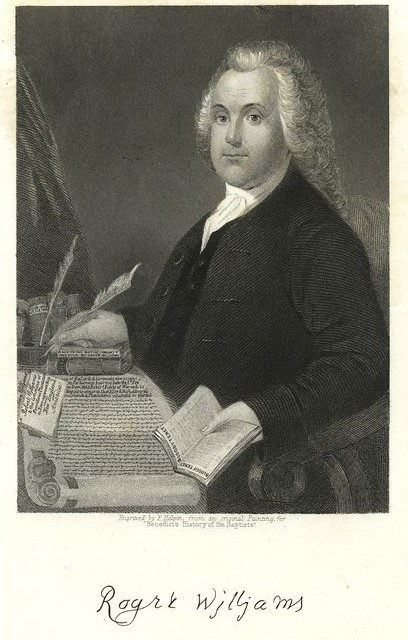 The religious controversies in England were tied to the crown, and the civil war between the Royalists and the Parliamentarians was already fomenting. To escape threatened persecutions against the Puritans, Roger Williams and his wife Mary Barnard (m. 1629–d. 1676) left for religious freedom in America.

He soon deemed the refuge he sought as unobtainable at the Massachusetts Bay Colony and other such established religious colonies. He objected to their intolerance of religious dissent, appropriation of Native American land, and uniting government with the church. His objections and criticisms led the General Court of Massachusetts Bay to eject Rogers from the colony in 1636. He again sought refuge, this time at Narragansett Bay, where he purchased land from the Native Americans and founded Providence in what is now Rhode Island, a city he envisaged as a religious sanctuary for true Dissenters and Separatists.

Williams viewed existing churches and institutions—as well as Christians themselves—as imperfect and unable to achieve true purity until the return of Christ, or the millennium. From this perspective, he believed that the church had no dominion over individual conscience and should therefore not enforce religious conformity in its civil rule or organization.

He returned to England in 1644 to obtain a patent for Rhode Island, returning again in 1651 to have it renewed upon its expiration or annulment. Williams thereby ensured a place open to liberty of conscience and relative tolerance of religious and racial differences. In 1654, he was elected as the colony’s president, a position he held for three succeeding terms.

He wrote several important polemical tracts, attacking the theology at Massachusetts Bay Colony and advocating for the separation of church and state. His Christenings Make Not Christians calls out those in the New World who claim to be practicing Christians, who cling more to form than real practice of charity for all humans on earth, including Native Americans.

Figure 2. A Key Into The Language Of America, Title Page 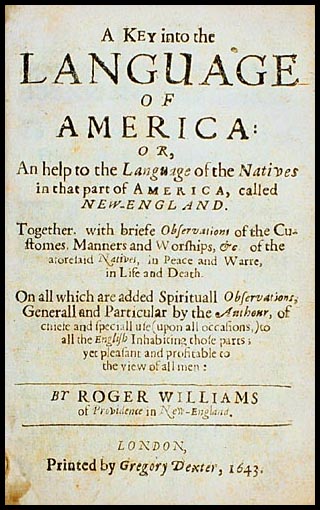