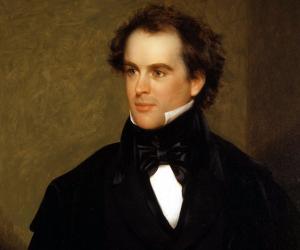 There can hardly remain for me (who am really getting to be a frosty bachelor, with another white hair, every week or so, in my mustache), there can hardly flicker up again so cheery a blaze upon the hearth, as that which I remember, the next day, at Blithedale. It was a wood fire, in the parlor of an old farmhouse, on an April afternoon, but with the fitful gusts of a wintry snowstorm roaring in the chimney. Vividly does that fireside re-create itself, as I rake away the ashes from the embers in my memory, and blow them up with a sigh, for lack of more inspiring breath. Vividly for an instant, but anon, with the dimmest gleam, and with just as little fervency for my heart as for my finger-ends! The staunch oaken logs were long ago burnt out. Their genial glow must be represented, if at all, by the merest phosphoric glimmer, like that which exudes, rather than shines, from damp fragments of decayed trees, deluding the benighted wanderer through a forest. Around such chill mockery of a fire some few of us might sit on the withered leaves, spreading out each a palm towards the imaginary warmth, and talk over our exploded scheme for beginning the life of Paradise anew.

Paradise, indeed! Nobody else in the world, I am bold to affirm–nobody, at least, in our bleak little world of New England,–had dreamed of Paradise that day except as the pole suggests the tropic. Nor, with such materials as were at hand, could the most skilful architect have constructed any better imitation of Eve’s bower than might be seen in the snow hut of an Esquimaux. But we made a summer of it, in spite of the wild drifts.

It was an April day, as already hinted, and well towards the middle of the month. When morning dawned upon me, in town, its temperature was mild enough to be pronounced even balmy, by a lodger, like myself, in one of the midmost houses of a brick block,–each house partaking of the warmth of all the rest, besides the sultriness of its individual furnace–heat. But towards noon there had come snow, driven along the street by a northeasterly blast, and whitening the roofs and sidewalks with a business-like perseverance that would have done credit to our severest January tempest. It set about its task apparently as much in earnest as if it had been guaranteed from a thaw for months to come. The greater, surely, was my heroism, when, puffing out a final whiff of cigar-smoke, I quitted my cosey pair of bachelor-rooms,–with a good fire burning in the grate, and a closet right at hand, where there was still a bottle or two in the champagne basket and a residuum of claret in a box,–quitted, I say, these comfortable quarters, and plunged into the heart of the pitiless snowstorm, in quest of a better life.

The better life! Possibly, it would hardly look so now; it is enough if it looked so then. The greatest obstacle to being heroic is the doubt whether one may not be going to prove one’s self a fool; the truest heroism is to resist the doubt; and the profoundest wisdom to know when it ought to be resisted, and when to be obeyed.

Yet, after all, let us acknowledge it wiser, if not more sagacious, to follow out one’s daydream to its natural consummation, although, if the vision have been worth the having, it is certain never to be consummated otherwise than by a failure. And what of that? Its airiest fragments, impalpable as they may be, will possess a value that lurks not in the most ponderous realities of any practicable scheme. They are not the rubbish of the mind. Whatever else I may repent of, therefore, let it be reckoned neither among my sins nor follies that I once had faith and force enough to form generous hopes of the world’s destiny–yes!–and to do what in me lay for their accomplishment; even to the extent of quitting a warm fireside, flinging away a freshly lighted cigar, and travelling far beyond the strike of city clocks, through a drifting snowstorm.

There were four of us who rode together through the storm; and Hollingsworth, who had agreed to be of the number, was accidentally delayed, and set forth at a later hour alone. As we threaded the streets, I remember how the buildings on either side seemed to press too closely upon us, insomuch that our mighty hearts found barely room enough to throb between them. The snowfall, too, looked inexpressibly dreary (I had almost called it dingy), coming down through an atmosphere of city smoke, and alighting on the sidewalk only to be moulded into the impress of somebody’s patched boot or overshoe. Thus the track of an old conventionalism was visible on what was freshest from the sky. But when we left the pavements, and our muffled hoof-tramps beat upon a desolate extent of country road, and were effaced by the unfettered blast as soon as stamped, then there was better air to breathe. Air that had not been breathed once and again! air that had not been spoken into words of falsehood, formality, and error, like all the air of the dusky city!

“How pleasant it is!” remarked I, while the snowflakes flew into my mouth the moment it was opened. “How very mild and balmy is this country air!”

“Ah, Coverdale, don’t laugh at what little enthusiasm you have left!” said one of my companions. “I maintain that this nitrous atmosphere is really exhilarating; and, at any rate, we can never call ourselves regenerated men till a February northeaster shall be as grateful to us as the softest breeze of June!”

So we all of us took courage, riding fleetly and merrily along, by stone fences that were half buried in the wave-like drifts; and through patches of woodland, where the tree-trunks opposed a snow-incrusted side towards the northeast; and within ken of deserted villas, with no footprints in their avenues; and passed scattered dwellings, whence puffed the smoke of country fires, strongly impregnated with the pungent aroma of burning peat. Sometimes, encountering a traveller, we shouted a friendly greeting; and he, unmuffling his ears to the bluster and the snow-spray, and listening eagerly, appeared to think our courtesy worth less than the trouble which it cost him. The churl! He understood the shrill whistle of the blast, but had no intelligence for our blithe tones of brotherhood. This lack of faith in our cordial sympathy, on the traveller’s part, was one among the innumerable tokens how difficult a task we had in hand for the reformation of the world. We rode on, however, with still unflagging spirits, and made such good companionship with the tempest that, at our journey’s end, we professed ourselves almost loath to bid the rude blusterer good-by. But, to own the truth, I was little better than an icicle, and began to be suspicious that I had caught a fearful cold.

And now we were seated by the brisk fireside of the old farmhouse, the same fire that glimmers so faintly among my reminiscences at the beginning of this chapter. There we sat, with the snow melting out of our hair and beards, and our faces all ablaze, what with the past inclemency and present warmth. It was, indeed, a right good fire that we found awaiting us, built up of great, rough logs, and knotty limbs, and splintered fragments of an oak-tree, such as farmers are wont to keep for their own hearths, since these crooked and unmanageable boughs could never be measured into merchantable cords for the market. A family of the old Pilgrims might have swung their kettle over precisely such a fire as this, only, no doubt, a bigger one; and, contrasting it with my coal-grate, I felt so much the more that we had transported ourselves a world-wide distance from the system of society that shackled us at breakfast-time.

Good, comfortable Mrs. Foster (the wife of stout Silas Foster, who was to manage the farm at a fair stipend, and be our tutor in the art of husbandry) bade us a hearty welcome. At her back–a back of generous breadth–appeared two young women, smiling most hospitably, but looking rather awkward withal, as not well knowing what was to be their position in our new arrangement of the world. We shook hands affectionately all round, and congratulated ourselves that the blessed state of brotherhood and sisterhood, at which we aimed, might fairly be dated from this moment. Our greetings were hardly concluded when the door opened, and Zenobia–whom I had never before seen, important as was her place in our enterprise–Zenobia entered the parlor.

This (as the reader, if at all acquainted with our literary biography, need scarcely be told) was not her real name. She had assumed it, in the first instance, as her magazine signature; and, as it accorded well with something imperial which her friends attributed to this lady’s figure and deportment, they half-laughingly adopted it in their familiar intercourse with her. She took the appellation in good part, and even encouraged its constant use; which, in fact, was thus far appropriate, that our Zenobia, however humble looked her new philosophy, had as much native pride as any queen would have known what to do with.

This work (From The Blithedale Romance (1852), Chapter II: Blithedale by Nathaniel Hawthorne) is free of known copyright restrictions.