In Chapter 7, we made a big leap from basic descriptive statistics into full hypothesis testing and inferential statistics. For the rest of the unit, we will be learning new tests, each of which is just a small adjustment on the test before it. In this chapter, we will learn about the first of three t tests, and we will learn a new method of testing the null hypothesis: confidence intervals.

In Chapter 7, we were introduced to hypothesis testing using the z statistic for sample means that we learned in Unit 1. This was a useful way to link the material and ease us into the new way to looking at data, but it isn’t a very common test because it relies on knowing the population’s standard deviation, s, which is rarely going to be the case. Instead, we will estimate that parameter s using the sample statistic s in the same way that we estimate

will still appear in our formulas because we suspect something about its value and that is what we are testing). Our new statistic is called t, and for testing one population mean using a single sample (called a one-sample t test) it takes the form:

Notice that t looks almost identical to z; this is because they test the exact same thing: the value of a sample mean compared to what we expect of the population. The only difference is that the standard error is now denoted

to indicate that we use the sample statistic for standard deviation, s, instead of the population parameter s. The process of using and interpreting the standard error and the full test statistic remain exactly the same.

Figure 8.1 shows four curves: a normal distribution curve labeled z, and three t distribution curves for 2, 10, and 30 degrees of freedom. Two things should stand out: First, for lower degrees of freedom (e.g., 2), the tails of the distribution are much fatter, meaning the a larger proportion of the area under the curve falls in the tail. This means that we will have to go farther out into the tail to cut off the portion corresponding to 5% or a = .05, which will in turn lead to higher critical values. Second, as the degrees of freedom increase, we get closer and closer to the z curve. Even the distribution with df = 30, corresponding to a sample size of just 31 people, is nearly indistinguishable from z. In fact, a t distribution with infinite degrees of freedom (theoretically, of course) is exactly the standard normal distribution. Because of this, the bottom row of the t table also includes the critical values for z tests at the specific significance levels. Even though these curves are very close, it is still important to use the correct table and critical values, because small differences can add up quickly.

The t distribution table lists critical values for one- and two-tailed tests at several levels of significance, arranged into columns. The rows of the t table list degrees of freedom up to df = 100 in order to use the appropriate distribution curve. It does not, however, list all possible degrees of freedom in this range, because that would take too many rows. Above df = 40, the rows jump in increments of 10. If a problem requires you to find critical values and the exact degrees of freedom is not listed, you always round down to the next smallest number. For example, if you have 48 people in your sample, the degrees of freedom are N − 1 = 48 − 1 = 47; however, 47 doesn’t appear on our table, so we round down and use the critical values for df = 40, even though 50 is closer. We do this because it avoids inflating Type I error (false positives, see Chapter 7) by using criteria that are too lax.

Hypothesis testing with the t statistic works exactly the same way as z tests did, following the four-step process of (1) stating the hypotheses, (2) finding the critical values, (3) computing the test statistic and effect size, and (4) making the decision.

We will work though an example: Let’s say that you move to a new city and find an auto shop to change your oil. Your old mechanic did the job in about 30 minutes (although you never paid close enough attention to know how much that varied), and you suspect that your new shop takes much longer. After four oil changes, you think you have enough evidence to demonstrate this.

Our hypotheses for one-sample t tests are identical to those we used for z tests. We still state the null and alternative hypotheses mathematically in terms of the population parameter and written out in readable English. For our example:

As noted above, our critical values still delineate the area in the tails under the curve corresponding to our chosen level of significance. Because we have no reason to change significance levels, we will use a = .05, and because we suspect a direction of effect, we have a one-tailed test. To find our critical values for t, we need to add one more piece of information: the degrees of freedom. For this example:

Going to our t table, a portion of which is found in Table 8.1, we locate the column corresponding to our one-tailed significance level of .05 and find where it intersects with the row for 3 degrees of freedom. As we can see in Table 8.1, our critical value is t* = 2.353. (The complete t table can be found in Appendix B.)

We can then shade this region on our t distribution to visualize our rejection region (Figure 8.2). 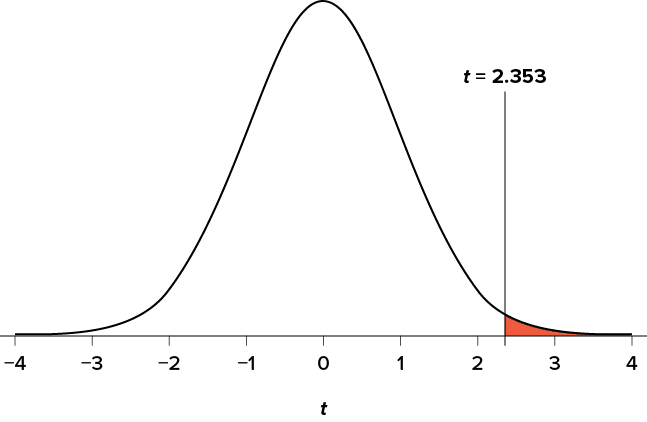 The four wait times you experienced for your oil changes at the new shop were 46 minutes, 58 minutes, 40 minutes, and 71 minutes. We will use these to calculate

and s by first filling in the sum of squares in Table 8.2.

Next, we take this value and plug it in to the formula for standard error:

And, finally, we put the standard error, sample mean, and null hypothesis value into the formula for our test statistic t:

This may seem like a lot of steps, but it is really just taking our raw data to calculate one value at a time and carrying that value forward into the next equation: data → sample size/degrees of freedom → mean → sum of squares → standard deviation → standard error → test statistic. At each step, we simply match the symbols of what we just calculated to where they appear in the next formula to make sure we are plugging everything in correctly.

Next we need to calculate an effect size, which is still Cohen’s d, but now we use s in place of s:

This is a large effect. It should also be noted that for some things, like the minutes in our current example, we can also interpret the magnitude of the difference we observed (23 minutes and 45 seconds) as an indicator of importance since time is a familiar metric.

Notice that we also include the degrees of freedom in parentheses next to t. Figure 8.3 shows the output from JASP. 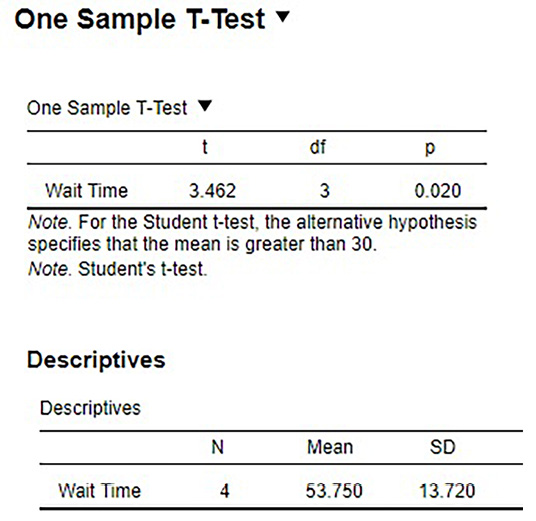 Up to this point, we have learned how to estimate the population parameter for the mean using sample data and a sample statistic. From one point of view, this makes sense: we have one value for our parameter so we use a single value (called a point estimate) to estimate it. However, we have seen that all statistics have sampling error and that the value we find for the sample mean will bounce around based on the people in our sample, simply due to random chance. Thinking about estimation from this perspective, it would make more sense to take that error into account rather than relying just on our point estimate. To do this, we calculate what is known as a confidence interval.

A confidence interval starts with our point estimate and then creates a range of scores considered plausible based on our standard deviation, our sample size, and the level of confidence with which we would like to estimate the parameter. This range, which extends equally in both directions away from the point estimate, is called the margin of error. We calculate the margin of error by multiplying our two-tailed critical value by our standard error:

One important consideration when calculating the margin of error is that it can only be calculated using the critical value for a two-tailed test. This is because the margin of error moves away from the point estimate in both directions, so a one-tailed value does not make sense.

To write out a confidence interval, we always use round brackets (i.e., parentheses) and put the lower bound, a comma, and the upper bound:

Let’s see what this looks like with some actual numbers by taking our oil change data and using it to create a 95% confidence interval estimating the average length of time it takes at the new mechanic. We already found that our average was M = 53.75 and our standard error was

Now we have all the pieces we need to construct our confidence interval:

So we find that our 95% confidence interval runs from 31.92 minutes to 75.58 minutes, but what does that actually mean? The range (31.92, 75.58) represents values of the mean that we consider reasonable or plausible based on our observed data. It includes our point estimate of the mean, M = 53.75, in the center, but it also has a range of values that could also have been the case based on what we know about how much these scores vary (i.e., our standard error).

As a function of how they are constructed, we can also use confidence intervals to test hypotheses. However, we are limited to testing two-tailed hypotheses only, because of how the intervals work, as discussed above.

You hear that the national average on a measure of friendliness is 38 points. You want to know if people in your community are more or less friendly than people nationwide, so you collect data from 30 random people in town to look for a difference. We’ll follow the same four-step hypothesis-testing procedure as before.

We will start by laying out our null and alternative hypotheses:

Now we can construct our confidence interval. After we collect our data, we find that the average person in our community scored 39.85, or M = 39.85, and our standard deviation was s = 5.61. First, we need to use this standard deviation, plus our sample size of N = 30, to calculate our standard error:

Now we can put that value, our point estimate for the sample mean, and our critical value from Step 2 into the formula for a confidence interval:

Note that we don’t report a test statistic or p value because that is not how we tested the hypothesis, but we do report the value we found for our confidence interval.

An important characteristic of hypothesis testing is that both methods will always give you the same result. That is because both are based on the standard error and critical values in their calculations. To check this, we can calculate a t statistic for the example above and find it to be t = 1.81, which is smaller than our critical value of 2.045 and fails to reject the null hypothesis.

Confidence intervals can also be constructed using z score criteria, if one knows the population standard deviation. The format, calculations, and interpretation are all exactly the same, only replacing t* with z* and

3)
As the level of confidence gets higher, the interval gets wider. In order to speak with more confidence about having found the population mean, you need to cast a wider net. This happens because critical values for higher confidence levels are larger, which creates a wider margin of error.

5)
False. A confidence interval is a range of plausible scores that may or may not bracket the true population mean.

= 0 “The average person has a neutral opinion toward craft beer,” HA:

≠ 0 “Overall, people will have an opinion about craft beer, either good or bad.”

“P-Values” by Randall Munroe/xkcd.com is licensed under CC BY-NC 2.5.) 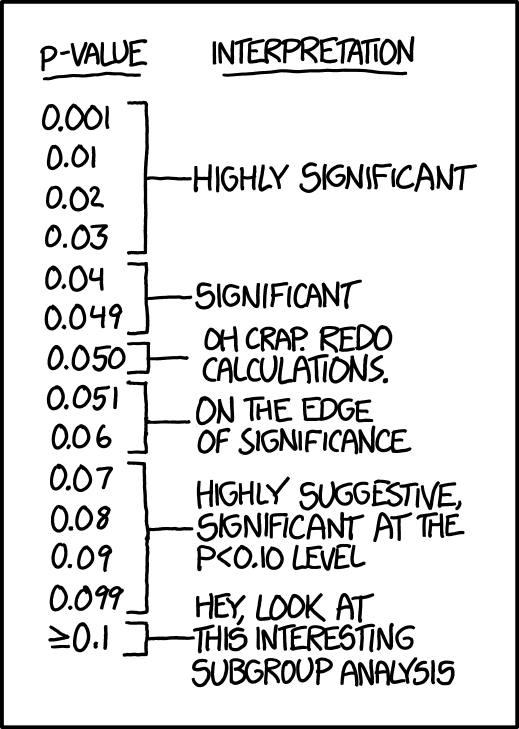